This article is part of a series of articles focused on building a company's infrastructure on AWS using Terraform, all of which(and more) I learnt on the Darey.io platform. The Darey.io platform adopts a project based learning style which has proven very effective in development, growth and career success evident in a lot of DevOps Engineers who have passed through the DevOps program on the platform.

The said company we would create an infrastructure for on this series needs a WordPress solution for its developers and a tooling solution for it's DevOps engineers. This would all be in a private network. Part 1 centers on basic intro, VPC and subnets creation. I'd be taking you through the processes involved, should you want to create same or similar infrastructure, while also learning and improving on terraform. You would write the code with Terraform and build the infrastructure as seen below. 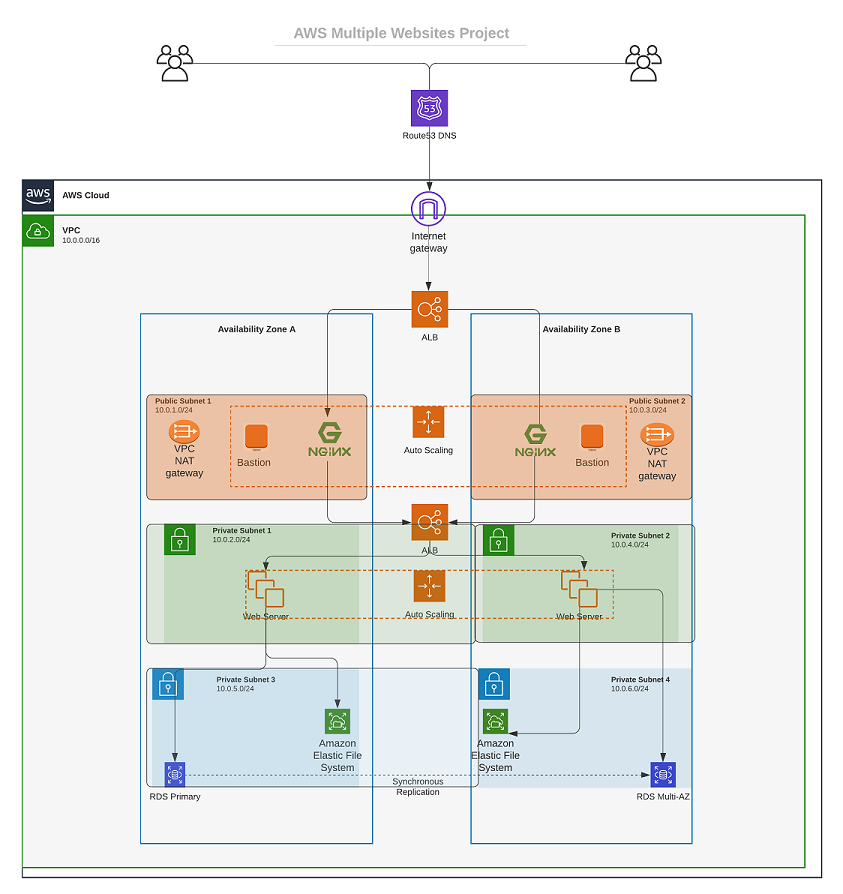 Programmable infrastructures allow you to manage on-premises and cloud resources through code instead of with the management platforms and manual methods traditionally used by IT teams.
An infrastructure captured in code is simpler to manage, can be replicated or altered with greater accuracy, and benefits from all sorts of automation. It can also have changes to it implemented and tracked with the version control methods customarily used in software development.

2.
Set up your Terraform CLI

3.
Add a provider block(AWS is the provider)

4.
Add a resource that would create a VPC for the infra.

5.
Run terraform init. Terraform relies on plugins called “providers” to interact with cloud providers, SaaS providers, and other APIs. Terraform configurations must declare which providers they require so that Terraform can install and use them. terraform init finds and downloads those providers from either the public Terraform Registry or a third-party provider registry. This is the part that generates the .terraform.lock.hcl you would notice when you run terraform init.

Notice that a new directory has been created: .terraform\.... This is where Terraform keeps plugins. Generally, it is safe to delete this folder. It just means that you must execute terraform init again, to download them.

6.
Run terraform plan to see what would be created when you decide to create your aws_vpc resource.

7.
Run terraform apply if only you accept the changes that would occur.

A new file is created terraform.tfstate This is how Terraform keeps itself up to date with the exact state of the infrastructure. It reads this file to know what already exists, what should be added, or destroyed based on the entire terraform code that is being developed.

Also created is the lock file .terraform.lock.hcl which contains information about the providers; in future command runs, Terraform will refer to that file in order to use the same provider versions as it did when the file was generated.

According to the infrastructure design, you will require 6 subnets:

Do not try to memorize the code for anything on terraform. Just understand the structure. You can easily get whatever resource block, from any provider you need on terraform registry All you have to do is to tweak it to your desired resource for your infra. Reason a good understanding of the structure of terraform is key. With time, writing the resource would be a breeze.

I'm sure you noticed the private subnets have not been created. On the next publication, you would move on with creating more resources while also refactoring your code. "Doing is the best way of learning", that is exactly what is going to happen in this project.

Once suspended, royalt1234 will not be able to comment or publish posts until their suspension is removed.

Once unsuspended, royalt1234 will be able to comment and publish posts again.

Once unpublished, all posts by royalt1234 will become hidden and only accessible to themselves.

If royalt1234 is not suspended, they can still re-publish their posts from their dashboard.

Once unpublished, this post will become invisible to the public and only accessible to Moses Itoya.

Thanks for keeping The Ops Community ⚙️ safe. Here is what you can do to flag royalt1234:

Unflagging royalt1234 will restore default visibility to their posts.