The purpose of this tutorial is to illustrate, to a complete beginner, how Docker works and how it can radically simplify their development environment and dependency management. Focus is on the very basics.

We'll talk enough about how Docker and containers work and what they mean, but we'll keep it at a general and, most importantly, practical level.

In the end of the tutorial we'll also note some helpful extra commands, including cleaning up images and containers from your machine.

Let's start by clearing up the concepts and terminology: 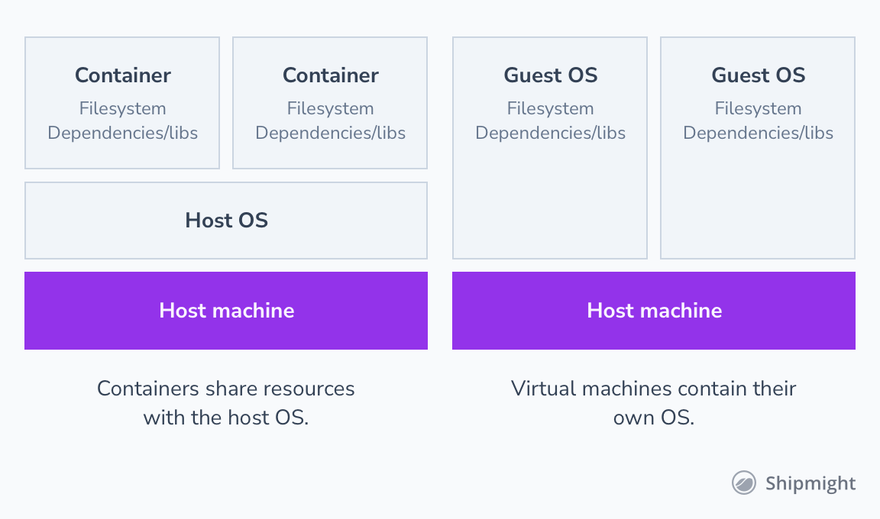 Note: Containers and container images are not exclusive to Docker, and can be used without Docker! While Docker really brought containers to the everyday toolkit of developers, there have been other similar tools developed (e.g. podman). At the time of writing, however, Docker is still the most popular and widely used container platform used by developers.

Images are a core concept of Docker. The first thing we want to do, in order to fully grasp all the upcoming topics, is to build a very basic image from scratch.

Images are built using docker build. The command takes in a single file, Dockerfile, which it reads step-by-step to configure the image.

The beauty of Docker is that you can build an image on any machine, like your own computer, and it can be used on any other computer which has Docker installed. This makes Docker great for packaging dependencies and software without worrying about what operating system everyone is using and if they have conflicting dependencies installed.

Let's build an image right now. You need to have Docker installed.

Note: The following commands affect your local Docker installation only, and all resources we create here can be easily removed. Nothing apart from Docker itself is installed on your machine directly. Everything else goes into disposable containers.

To prepare, create a new directory and an empty Dockerfile in it:

Next, write the following contents in Dockerfile:

(You may have noticed that I've used whitespace to align the columns of text. This is not required, but is common practice to make the file more readable.)

Let's break it down line by line:

Let's now use this Dockerfile to build an image. We'll give it a name of "first-image":

Nice! Docker went through all the lines in out Dockerfile and performed the operations we had configured. Each step was also cached; when we change things, only the changed layers (identified by the SHA-digests you see in the output above) will be rebuilt.

Here's an illustration of the process: 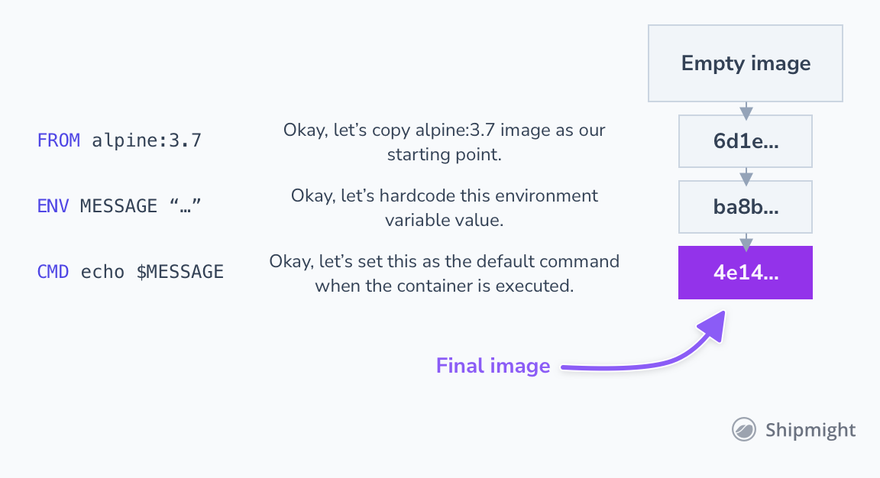 The image was built and we can now see it available on our machine:

Let's start a container with our new image:

That is all it took for us to run a command inside a contained Linux distribution, isolated on our machine. You could push this image to an image registry, and your colleague could pull it from there and run it, and they'd get the exact same behaviour. This is how Docker can be used to package software in a reusable manner.

You can also override the default command. For example, run date which prints out current date:

Let's make the image a bit more complex by installing curl into it and calling a mock API. Update Dockerfile to look like this:

Note: Earlier we used the command docker image ls, which lists images that are available in the machine. The last command, docker ps, lists containers which have been started using those images.

As you can see, each line says "Exited X minutes ago". The containers were started but they are not running anymore (we'll cover continuous processes in the next section). We can remove the unused containers like so:

Note: docker has autocomplete for bash, so you can just type docker rm [TAB] and the container names will be suggested.

In the future, when we run containers like these, we might want to specify the --rm option so that Docker will automatically remove the container after it stops. Like so:

No containers were listed, as we hoped for! Docker removed the container automatically after it had finished execution.

You also probably noticed the strange names of your containers. They were auto-generated by Docker. You can specify a name for a container by using the --name option:

Great. Let's move on to containers that stay running in the background...

In the previous section we built our own custom image. In this one, we'll utilize the powerful Docker Hub, which contains pre-configured images for nearly any software you might need in your projects.

For example, this is all it takes to start an isolated Postgres database on our machine, using the postgres image:

Note: As with any terminal command, you can terminate the process by pressing Ctrl+C.

Docker first pulled the image from Docker Hub, and then created and started a container with it.

You can run many of these containers at the same time. While the old one is running, open another tab in your terminal and start a second one:

Note: Even if both containers logged "listening on port 5432", they are actually listening inside the containers, not on your host machine. So there is no port collision. In the next section we'll learn how to expose ports to the host machine.

You now have two Postgres databases running on the same machine, without having to install anything else but Docker on your computer. The containers don't have access to your filesystem and only make changes inside their own. How neat is that!

Notice that the second time Docker didn't have to pull the postgres image again. It was already available on your machine. As mentioned before, you can list all the available images:

These Postgres instances keep running until you press Ctrl+C. This isn't very practical if you want to run a database in the backgrond. The solution is to run it in detached mode by setting the --detach (or -d) option:

Now the container was started and it is still running, but in the background (the output from the command is its ID). You can see it by listing all running containers:

You can view its console output:

You can execute a command inside it (substitute whoami with your command):

Note: Processes inside Docker containers run as root by default. This can (and should!) be changed per-image via the USER instruction in Dockerfile.

You can stop it:

And you can remove it (add --force or -f to force removal if it's running):

You can usually find a premade image for any software. Simply google for "software docker". For example, here's a bunch of ready-to-use, popular images:

You can try any of these by simply running docker run <image>.

Above we started some containers, but didn't really communicate with them. In most projects there are two types of communication you would want to do with your software dependencies:

It's very easy to achieve both in Docker.

For network access, we can configure shared ports for containers. For example, Postgres by default listens to port 5432. We can expose this port to our host machine via the --publish (or -p) option:

Note: The username, password and database name are all defaults ("postgres"), as is documented on the Docker Hub page. We will learn how to customize them in the next section.

For filesystem access, we can tell Docker to bind mount a specific directory (or file) to a location inside the container. For example, we could persist the Postgres data directory on our host machine:

Now when inside the container Postgres writes its data to /var/lib/postgresql/data, the files are actually stored on your host machine at /path/to/docker-tutorial/postgres-data.

Or we could substitute the nginx configuration file with our own:

It is also possible to specify read-only access for the container by adding :ro, if necessary. In that case the container can't write to the mounted location:

In these examples we mounted locations to actual locations on the host machine by specifying the absolute path to them. Docker also supports Docker volumes, which are storage volumes managed via docker commands. You can create a volume:

And the use it by its name:

Behind the scenes Docker volumes are actually just directories created by Docker. They are stored in a hidden folder (e.g. /var/lib/docker/volumes in Linux).

You can choose to use bind mounts or Docker volumes based on your preference. Bind mounts are perhaps easier to understand and inspect in the beginning, because you have to specify a concrete location for them.

If a container expects custom configuration, it is usually done via environment variables (--env or -e). For example, we can customize the Postgres user, password and database name when starting the container:

Such configuration varies based on the image, and is usually documented on the Docker Hub page for that image. Search for "Environment Variables" on the postgres image page.

Where to go from here

In the beginning you'll probably find Docker more useful for deploying your development dependencies than building your own images.

The simplest way to get going is to just use the docker command in your next project to start third-party dependencies. You will probably find it faster and more convenient to manage simultaneous database instances, etc., than what you were using before.

Some useful examples to get started with databases:

Once you're comfortable with starting and managing containers manually, the next step could be to specify your development environment in a file called docker-compose.yml and to use the docker compose command to start/stop dependencies. This way anyone can clone your project source code, run docker compose up and be ready to start developing. Here's an example docker-compose.yml, taken directly from postgres Docker Hub page:

You could add other services you need into the specification, then just run docker compose up and Docker will start the new ones and remove the old ones. Running docker compose down will remove all containers and their volumes. Try it and you will see it is a very efficient way to set up and share local development environments per project for your team.

Other helpful commands when getting started

Remove all containers, including running and not-running:

Remove any images that are not used currently by any container:

Remove any volumes that are not used currently by any container:

Here's an image version you can save to your disk: 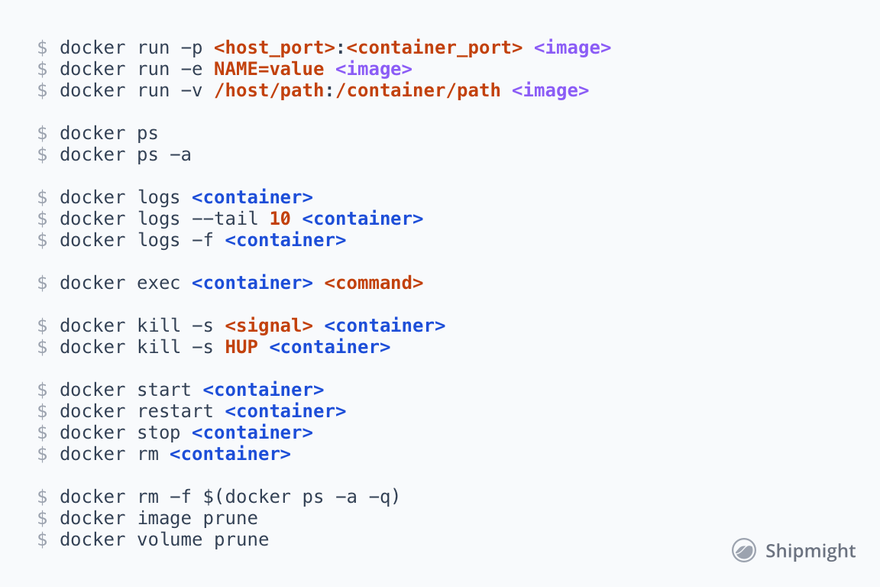 Azure Kubernetes Service — behind the scenes

Once suspended, codeclown will not be able to comment or publish posts until their suspension is removed.

Once unsuspended, codeclown will be able to comment and publish posts again.

Once unpublished, all posts by codeclown will become hidden and only accessible to themselves.

If codeclown is not suspended, they can still re-publish their posts from their dashboard.

Once unpublished, this post will become invisible to the public and only accessible to Martti Laine.

Thanks for keeping The Ops Community ⚙️ safe. Here is what you can do to flag codeclown:

Unflagging codeclown will restore default visibility to their posts.