This article was originally posted on Everything DevOps.

After a bit of research, I found out that the error tends to happen when the architecture an image is built on differs from the architecture it is running on. I then remembered that I was building the image on a MacBook with Apple M1 Chip which is based on ARM64 architecture, and the worker nodes in the EKS cluster I deployed on are based on x86 architecture.

I had two options to fix the error: create new ARM-based worker nodes or build the image on x86 architecture. I couldn’t create new worker nodes for obvious reasons, so I had to figure out how to build x86 images on my Apple M1 chip.

In this article, I will walk you through how I built my application’s Docker image with x86 architecture on an Apple M1 chip using Docker Buildx.

What is Docker Buildx?

Docker Buildx is a CLI plugin that extends the docker command. Docker Buildx provides the same user experience as docker build with many new features like the ability to specify the target architecture for which Docker should build the image. These new features are made possible with the help of the Moby BuildKit builder toolkit.

Before you can build x86-64 images on an Apple M1 chip with Docker Buildx, you first need to install Docker Buildx.

But if you are like me that use another tool to get the Docker runtime, install Docker Buildx through the binary with the following commands:

After setting the temporary environment variables, download the binary with:

After downloading the binary, create a folder in your home directory to hold Docker CLI plugins with:

Then move the binary to the Docker CLI plugins folder with:

After that, make the binary executable with:

To verify the installation, run:

After installing Docker Buildx, you can now easily build your application image to x86-64 on an Apple M1 chip with this command:

In the above command: 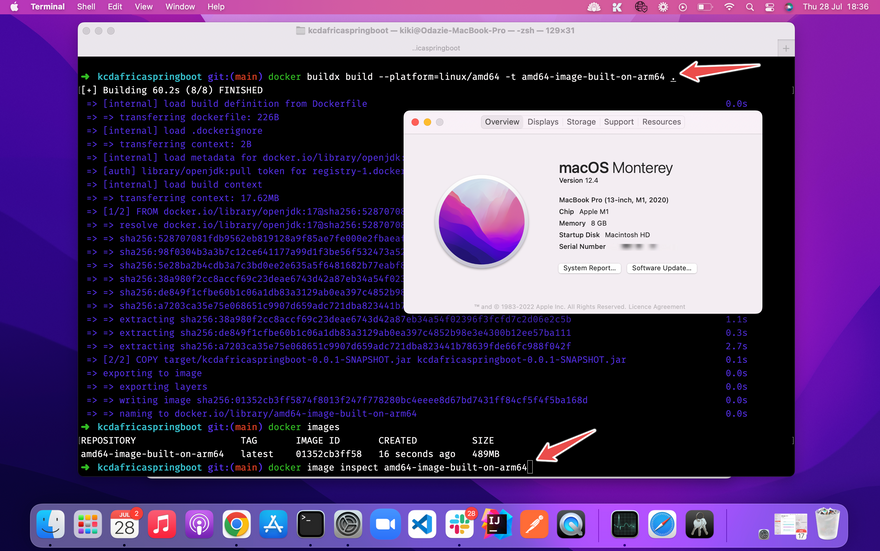 To verify that Docker built the image to linux/amd64, use the docker image inspect <image_name> command as you can see annotated screenshot above.

The inspect command will display detailed information about the image in JSON format. Scroll down, and you should see the Architecture and Os information as in the image below. 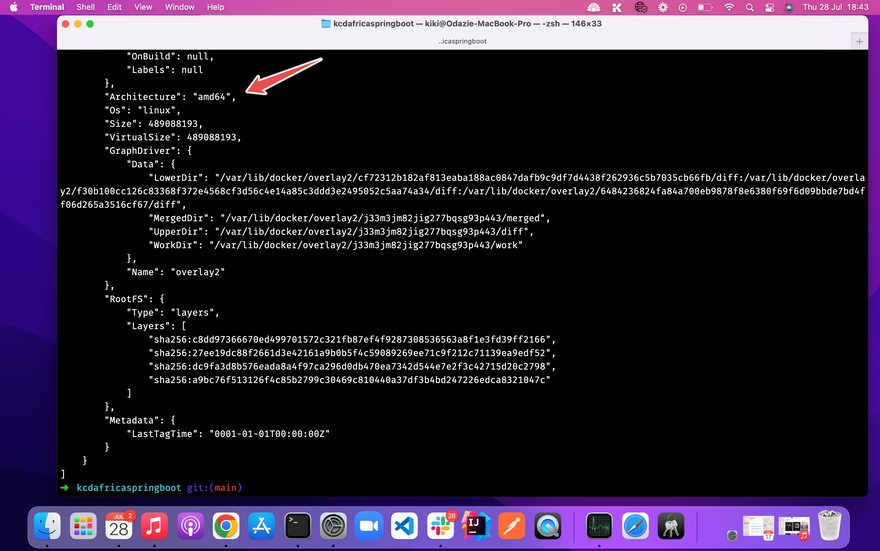 This article explored building images based on x86 architecture on an Apple M1 chip using Docker Buildx. There is so much more to learn about Docker Buildx. To learn more, check out the following resources:

Infrastructure as Code: The benefits and the tools

Infrastructure from code - not 'as', but 'from'

Divine Odazie
My name is Divine Odazie, I am a Developer Advocate and Technical Writer. I spend my days building, writing, and contributing to open source software.
How to Set Environment Variables on a Linux Machine
#devops #tutorials
How to avoid merge commits when syncing a fork
#github #tutorials
Kubernetes Architecture Explained: Worker Nodes in a Cluster
#devops #kubernetes #docker #cloudops

Once suspended, kikiodazie will not be able to comment or publish posts until their suspension is removed.

Once unsuspended, kikiodazie will be able to comment and publish posts again.

Once unpublished, all posts by kikiodazie will become hidden and only accessible to themselves.

If kikiodazie is not suspended, they can still re-publish their posts from their dashboard.

Once unpublished, this post will become invisible to the public and only accessible to Divine Odazie.

Thanks for keeping The Ops Community ⚙️ safe. Here is what you can do to flag kikiodazie:

Unflagging kikiodazie will restore default visibility to their posts.