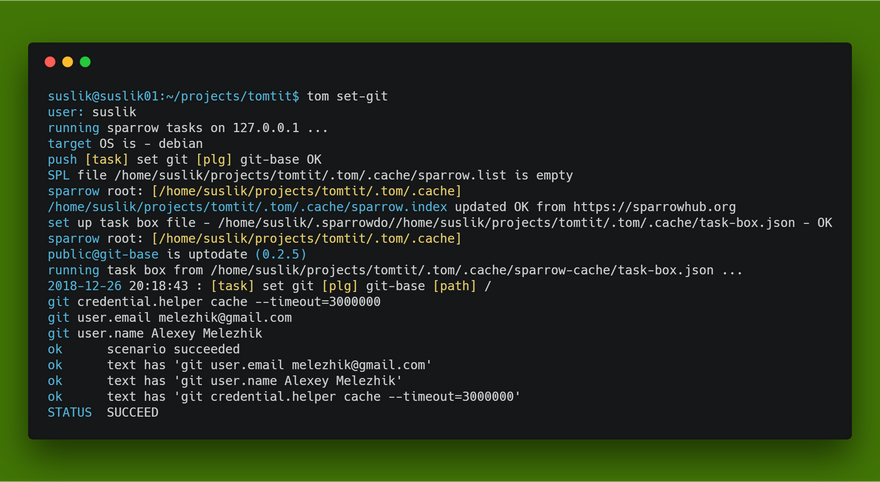 Tomtit is a Raku task runner with dozens of plugins, you can use it as alternative for many task runners.

As a bottom line it helps you to get things done with a minimal of fuss, yet not limited you to a static DSL but allow you to orchestrate your scenarios in modern and powerful language Raku.

So, are you ready to get closer?

Tomtit is installed as Raku module.

Your usual workflow with tomtit is when you define scenarios and then run them. It works especially nice with project-centric approach where you checkout the source code of application and run some related tasks.

Say, we have an application source code, where we perform 3 standard operations:

We end up with scenarios, we name then build, test and install.

If use make utility to build project, it could be just a 3 invocations of make utility with related arguments.

The code of every scenarios is as simple as running make though bash shortcut:

The tomtit scenarios are written in Raku and basically are just calls of different tasks, those scenarios however not necessarily limited tasks calls, they just are Raku programs where you can do anything you could with Raku.

There are two syntactically different types of tasks in Tomtit. The first one you call by the means of task-run function and second one is shortcuts - pretty much the same as task-run but with mnemonic names and sometimes easier signatures.

In the scenarios for make utility we used bash shortcut to call a piece of Bash code. The full list of shortcuts as we as calling details is here - https://github.com/melezhik/sparrowdo/blob/master/core-dsl.md

In other words both task-run and shortcuts is just a way to call small piece if code that is downloaded from SparrowHub - script repository and then executed by sparrow internal script runner for tomtit, I have not told you but we have one more birds in our zoo-repository!

These small scripts or tasks are also called Sparrow plugins.

Tomtits scenarios basically are just a list of executed Sparrow plugins or tasks.

Once scenarios are defined you run them through tom --run=$scenario command.

To recall what was the last scenario you run use tom --last command.

Like I said, you are not limited running Bash only in Tomtit scenarios. You can run any task provided you find related plugin for it.

The task is often useful when you've just clone new project, make some changes and want to push some changes back to remote. Git requires you to set your identities as a commiter.

By setting config_scope we ask task to make settings for local git repository and by setting set_credential_cache we also ask git to cache our password, so we don't enter it every time we do git push

The list of plugins you can use in Tomtit scenarios is available at SparrowHub - sparrow plugin repository.

In the next scenario example we create task to run VSTS build remotely through the vsts-build plugin:

There are many other plugins you can use in Tomtit scenarios as tasks. Check out SparrowHub repository.

Tomtit provides you with the plenty of small script or plugins you might use in daily tasks, especially when dealing with source code management and build automation.

There is syntax sugar - predefined set of built-in functions you can use instead of referring to plugins, that make code more concise and easier to read.

If for some reasons you don't find plugin to solve your task, you can always create your own one and start using it strait away.

Tomtit is easy to use, powerful and fun - give it a try, and let me know how it's going on.

The Top Elastic Beanstalk Alternatives for Startups in 2022

Once suspended, melezhik will not be able to comment or publish posts until their suspension is removed.

Once unsuspended, melezhik will be able to comment and publish posts again.

Once unpublished, all posts by melezhik will become hidden and only accessible to themselves.

If melezhik is not suspended, they can still re-publish their posts from their dashboard.

Once unpublished, this post will become invisible to the public and only accessible to Alexey Melezhik.

Thanks for keeping The Ops Community safe. Here is what you can do to flag melezhik:

Unflagging melezhik will restore default visibility to their posts.