Using a external hard drive, where it it super easy to plug it in start working from where you left off isn't the kind of storage strategy one would think off when creating a VM on cloud.

But using it with VM and data you often need can be super useful and time-saver. Here are the steps to get started :

With its content as the connection script provided by azure for mounting FileShare, go to the Azure file storage account 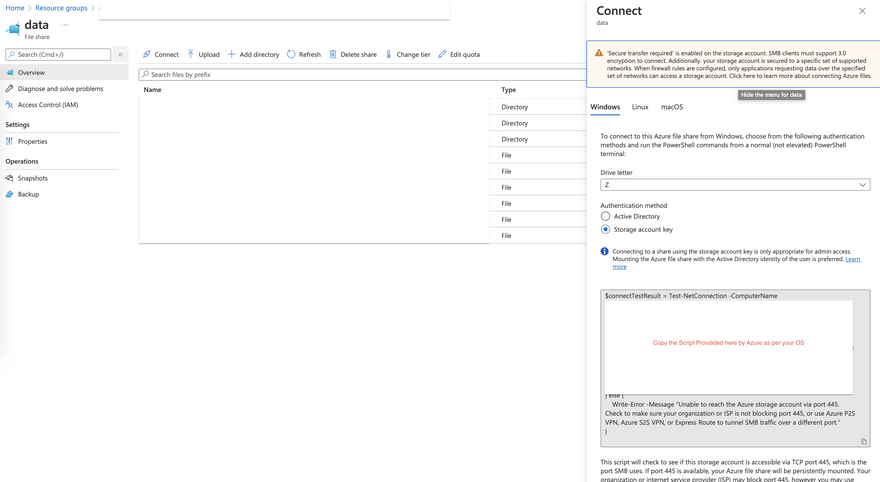 Copy the script provided by azure into the script.ps1 file and save it !

In the Same folder create a file startup.bat with the following code :

And Done ! On every VM or Windows Machine Restart your Storage Account will be Mounted as Z: drive in your OS as the Shell Script will be Auto Executed in Windows

Terraform: Alternative to the Template provider on Apple M1 MBP

Dynamically scale down AppService outside business hours to save 💰💰

Once suspended, dev117uday will not be able to comment or publish posts until their suspension is removed.

Once unsuspended, dev117uday will be able to comment and publish posts again.

Once unpublished, all posts by dev117uday will become hidden and only accessible to themselves.

If dev117uday is not suspended, they can still re-publish their posts from their dashboard.

Once unpublished, this post will become invisible to the public and only accessible to Uday Yadav.

Thanks for keeping The Ops Community safe. Here is what you can do to flag dev117uday:

Unflagging dev117uday will restore default visibility to their posts.