Kubernetes Secrets are where Kubernetes stores secret objects such as passwords, OAuth tokens, sensitive data, and SSH keys. It is stored in the Kubernetes controller and is kept separate from the pods where your application runs.

The name secret is a bit misleading, as it is not a secret. It is just base-64 encoded and stored in etcd.

Besides, following GitOps processes for your Kubernetes application works great for most resources, but it has some limitations when it comes to managing and storing secrets. Storing your secret data with Kubernetes Secrets on Git is uncontrolled for access and is a security risk.

Let's look at the limitations of Kubernetes Secrets and how to overcome them.

The created secret manifest would look something like this:

Considering the major limitations of using Kubernetes Secrets, there are many new approaches being developed by the Kubernetes community. Kubernetes SIGs like the Secrets Store CSI Driver and solutions like the external secrets operator that works with third-party secret managers, and options to seal secrets through tools like bitnami’s sealed-secrets. To skip the tools and move directly to best practices, click here.

All these take different approaches; let’s learn more about them.

Sealing secrets is very GitOps friendly enabling users to check-in encrypted secrets into Git using bitnami’s sealed-secrets tool. The tool matches the cluster’s namespace/name to ensure that the sealed secret can only be decrypted at the right location. The tool is made to be automation and GitOps friendly.

Once you install it using Helm chart, Homebrew, or the many other methods available, the tool can be accessed right from your CLI using the kubeseal command. Creating a new secret can be done by feeding secrets as raw text, feeding a JSON/YAML file containing the secret as input, or by using kubectl create secret --dry-run. The output encrypted file is safe to share publicly. This makes it easier to upload into your Git with the rest of your configuration.

Within your cluster, the Sealed Secret controller decrypts the secrets and makes them easily accessible, just like a Kubernetes Secret.

Additional features like the Prometheus metrics exposed by the Sealed Secret controller expose metrics on errors like a wrong key, corrupted data, and other RBAC permissions. You can also bring your own certificates and use one controller for multiple namespaces.

The default period for the encryption key renewal is 30 days, which can be changed or set to an earlier date. The keys can also be stored in a backup location.

It is important to note that anyone with access to your cluster will be able to see the decrypted secrets. Thus, make sure there are no malicious users accessing your cluster.

This approach takes the secrets from your external secret stores, such as AWS Secrets Manager, Google Cloud Secret Manager, Azure Key Vault, Hashicorp Vault, etc, and makes them available to your Kubernetes application. This is made possible by the External Secrets Operator - an open-source Kubernetes operator that reads information from external APIs and automatically injects the values into a Kubernetes Secret.

External Secrets Operator (ESO) is a collection of custom API resources - ExternalSecret, SecretStore, and ClusterSecretStore that provide a user-friendly abstraction for the external API that stores and manages the lifecycle of the secrets for you.

ExternalSecret - It is a declaration of what data has to be fetched from your external secret manager. It references a SecretStore, which knows how to access the data. You can do more things like refresh interval can be set, specify a blueprint for the resulting Kind=Secret, use inline templates to construct the desired config file containing your secret, set a target that will be created, and creation and deletion policies. Refer to this example for implementation steps.

SecretStore - They are namespaced by design and cannot communicate with resources across namespaces. This is the file where you select your ESO controller, cloud provider along with role and access IDs, and retry settings in case of connection failure.

The secrets are fetched from an external vault and made available in SecretStores, these are limited to that particular namespace. For use in multiple namespaces, use the ClusterSecretStore. 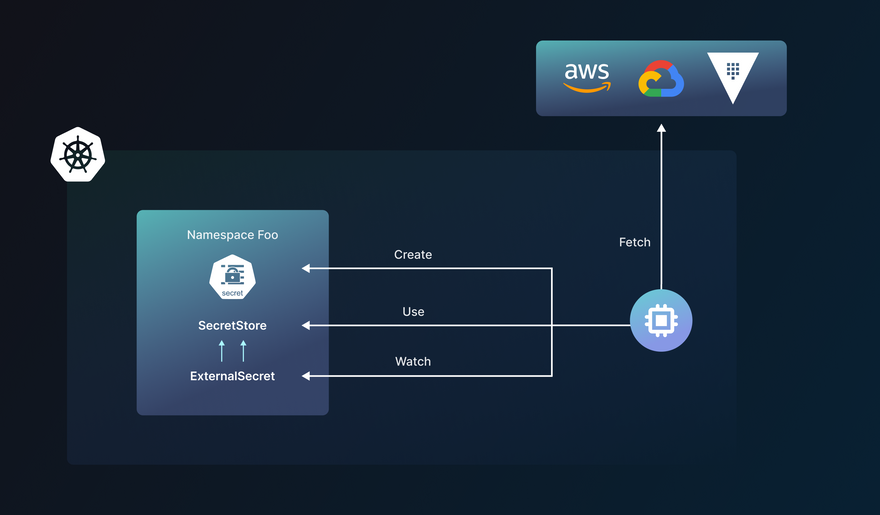 ClusterSecretStore - This is a cluster-scoped secret store and can be used as a central gateway to your external secret store. All ExternalSecrets can reference secrets stored here from all namespaces.

There’s a new Secret store Container Storage Interface (CSI) driver in development by one of the Kubernetes’ SIGs. This approach employs ephemeral volumes to store secrets, which get mounted onto the application pod. The Secrets Store CSI driver enables extension through providers. Its two main components are the Secrets Store CSI Driver and the SecretProviderClass.

Secret Store CSI driver is a DaemonSet that facilitates communication with every instance of Kubelet. A provider is launched as a Kubernetes DaemonSet alongside Secrets Store CSI driver DaemonSet. The driver communicates to the provider using gRPC to fetch and mount contents from the external secret store. The providers currently supported are AWS, GCP, Azure, and Vault.

The SecretProviderClass is a namespaced custom resource in the Secrets Store CSI driver used to provide driver configurations and provider-specific parameters to the CSI driver. Remember that it needs to be created in the same namespace as the pod.

If you’re using secret management tools like Doppler or Vault, you can directly inject secrets at runtime.

Doppler does this by embedding the Doppler CLI in your Dockerfile. You then have access to Doppler secrets from your production or CI/CD environments through a Service Token which provides read-only access to a specific config via the DOPPLER_TOKEN environment variable.

Vault users are able to install and configure a Vault Agent as a sidecar alongside their applications. Vault Agent is a client daemon with features like Auto-Auth, Lifecycle management of tokens, Templating, Caching, and windows service. Once the trust is established, subsequent transfer of secrets becomes easy.

The Secretless broker is an open-source, independent, and extensible project maintained by CyberArk. It is designed to work seamlessly with Kubernetes, providing a secure and convenient way for applications to authenticate without the need for the developer to fetch, handle, or embed secrets in the application's code. When an application needs to access a secret, it sends a request to the Secretless broker, which is responsible for fetching the secret from a vault (Conjur secrets) and returning it to the application in a secure manner.

Secretless is typically deployed as a sidecar container that shares a trusted network stack with your application container. It is this trusted sharing that enables your application to make connections through Secretless. It is publicly available as a container image on DockerHub.

There is only a limited number of secret providers and service connectors currently supported.

With Argonaut’s modern deployment platform, you can get up and running on AWS or GCP in minutes, not months. Our intuitive UI and quick integrations with GitHub, GitLab, AWS, and GCP make managing your infra and applications easy - all in one place.

No Chance Event! How We Built Our Event-Driven Architecture

Once suspended, argonaut will not be able to comment or publish posts until their suspension is removed.

Once unsuspended, argonaut will be able to comment and publish posts again.

Once unpublished, all posts by argonaut will become hidden and only accessible to themselves.

If argonaut is not suspended, they can still re-publish their posts from their dashboard.

Once unpublished, this post will become invisible to the public and only accessible to Argonaut.

Thanks for keeping The Ops Community ⚙️ safe. Here is what you can do to flag argonaut:

Unflagging argonaut will restore default visibility to their posts.