When working with Argonaut, the heart and soul of it is behind how most cloud-native apps are deployed in today’s world, with Kubernetes. Luckily, you don’t have to do much engineering to get it up and running! Argonaut handles everything for you.

In this blog post, you’ll learn what Argonaut handles for you, how Kubernetes is set up with Argonaut when a new environment is created and dive deep into the internals of how it all works.

To create a new environment, all you need is access to the UI at ship.argonaut.dev and a few minutes to spare.

To create a new environment, you’ll have to input some information:

For the purposes of this blog post and in a dev environment, you can set up 1 node as shown in the screenshot below.

Click the purpose Create Environment button on the right side.

and just like that, a new environment is being created!

You can easily check the status of infra from the History page, which also includes logs.

Once the environment is configured, there are some “out-of-the-box” applications created during the setup for the Kubernetes environment.

All of the out-of-the-box applications are created via Kubernetes Helm charts.

Seems straightforward, right? That’s because it is! However, there’s a lot that happens under the hood and it’s important to understand from an engineering perspective what’s happening. That way, you know what’s being created and how to troubleshoot.

Seeing The Logs In A New Environment 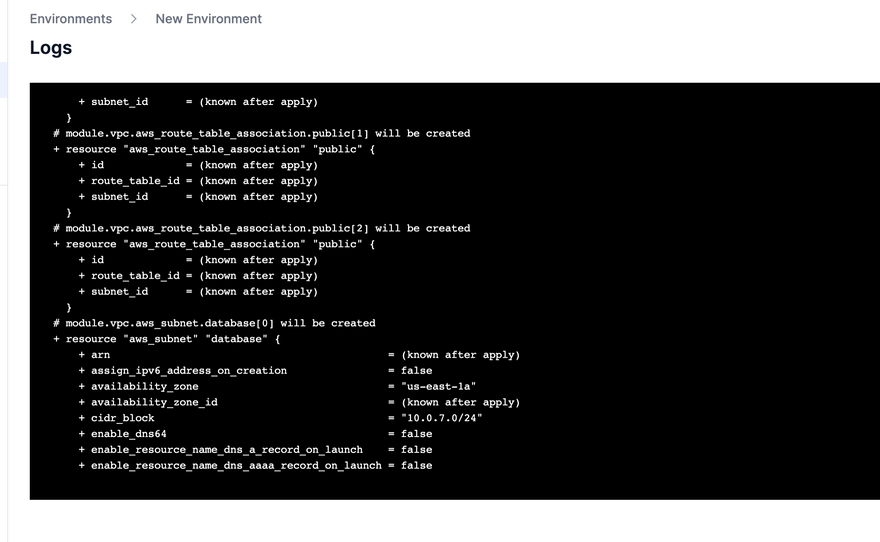 The logs will show you everything from what’s being created to what fails to create, and for troubleshooting purposes, the logs are crucial.

Throughout the logs, you’ll see several resources that are created. All of the resources created are for the Kubernetes cluster to run properly in the environment you’re running Argonaut in. Resources include:

What’s Created But Not Used?

Throughout the logs, you’ll see a few other resources that are created, for example, a subnet for ElastiCache and a database. However, when you go into your environment (for example, in AWS), you won’t see those resources created.

The reason why is because they’re created for later use.

Inside of Argonaut, you’ll see a four-square-icon like in the screenshot below.

When you click on that icon, you’ll see several resources that can be managed by Argonaut.

The reason why the resources, like the ElastiCache subnet and DB subnet are created but not used, is so they can be used later for the resources under the Infrastructure tab per the playback above.

Terraform Modules For The Environment

Thinking about the previous section, Seeing The Logs In A New Environment, you may be wondering well, I know it’s all created via Terraform, but where is that code?

Luckily, the TF modules are open-source for anyone to view!

Inside of module/aws, you’ll see all of the Terraform modules that are used to create the resources that you saw being created in the Environment logs. 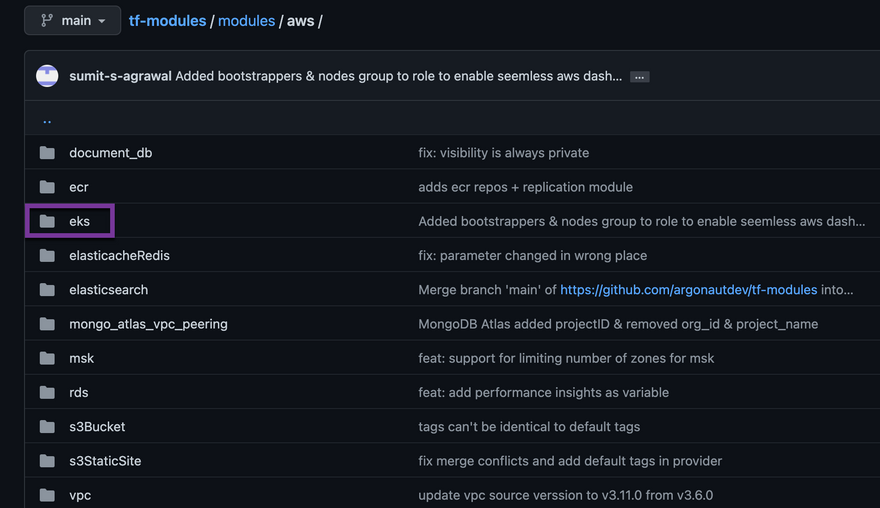 Within the eks directory is where the magic happens! This is how the Kubernetes cluster gets created for you to use via Argonaut.

Clicking on the main.tf, which is the primary configuration file in Terraform, you can see exactly how the EKS cluster is created. 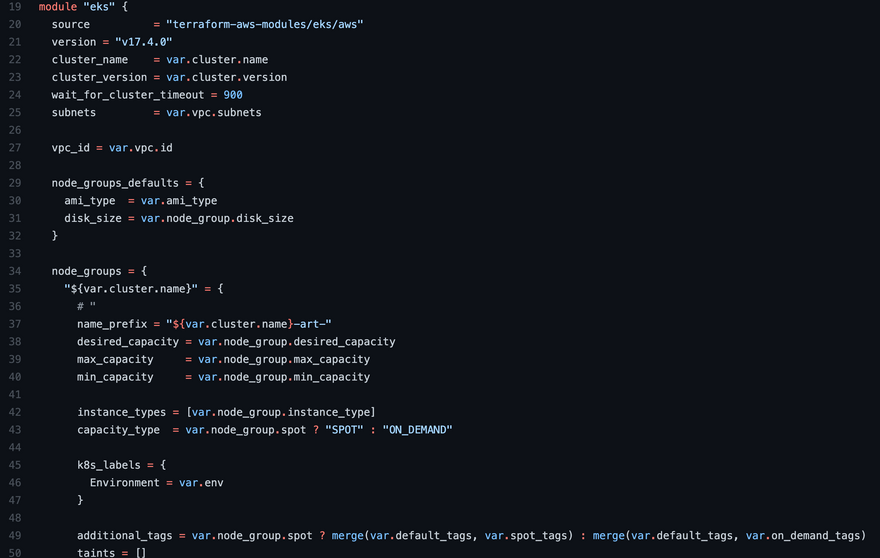 Taking A Look At The Created Resources In AWS

Now that the environment is created, which can take up to 20 minutes or so, it’s time to log into AWS and take a look at what exists. The two primary pieces that you should take a look at are:

Log into AWS and go to the VPC dashboard.

Within the VPCs, you’ll see a new VPC that’s named the same as you named your environment in the first section of this blog post. 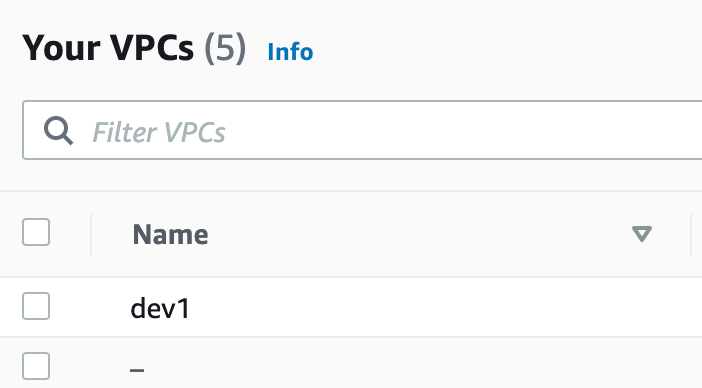 Within the VPC is where you can see things like the CIDR range, route tables, Access Control Lists (ACL), and DNS settings.

If you click on subnets in AWS and filter out your VPC that was created with Argonaut, you’ll see all of the subnets for EKS, ElastiCache, and databases.

Going into the brain behind Argonaut is the Kubernetes cluster. From the AWS portal, go to the EKS page.

Within the EKS page, you’ll see the EKS cluster. Notice how it’s named the same as the VPC. That’s because it gets the same name as when you were setting up the Argonaut environment, just like the VPC.

If you click on the cluster, you’ll see all of the available resources including authentication, logging, networking, and compute for the Kubernetes worker nodes. Luckily there’s really not much you have to do here as Argonaut manages the entire configuration for you.

As you saw throughout this blog post, there are a lot of environment configurations that are set up. Everything from an entire network (the VPC) to a fully-functional Kubernetes cluster running in EKS. The amazing thing about this is even though it’s a complicated setup, you don’t have to worry about managing any of it yourself.

With cloud-native applications, there’s typically a ton of overhead and management. With Argonaut, it’s all abstracted for you. You don’t have to worry about creating the network, figuring out the CIDR’s, what subnets you need, permissions, the entire Kubernetes configuration, or anything else. You simply focus on your app while we take care of your deployments and help manage your cloud configurations.

Thanks to Michael Levan for helping put together the post!

Once suspended, argonaut will not be able to comment or publish posts until their suspension is removed.

Once unsuspended, argonaut will be able to comment and publish posts again.

Once unpublished, all posts by argonaut will become hidden and only accessible to themselves.

If argonaut is not suspended, they can still re-publish their posts from their dashboard.

Once unpublished, this post will become invisible to the public and only accessible to Argonaut.

Thanks for keeping The Ops Community ⚙️ safe. Here is what you can do to flag argonaut:

Unflagging argonaut will restore default visibility to their posts.